IronCore is a data privacy SDK and cloud service. The getting-started-angular repo is a sample Angular application that uses IronCore to grant, monitor and revoke access to sensitive data.

IMPORTANT: You must start the application with npm start and not with ng serve. The application relies on a local node server as a back end.

Browse to the app

The project is configured to run a local angular dev server on localhost:4200 and a local backend node server.

Our mission is to develop an application for Captain James T. Kirk of the Starship Enterprise. When the Enterprise explores a new planet, Captain Kirk selects crewmembers to visit the planet surface. These crewmembers make up the away-team. Kirk needs to be able to send the away-team orders without having the commands be seen by adversaries.

When you load the application for the first time, you will be logged in as Captain Kirk and an away-team group is created behind the scenes. Open the developer console to see log output similar to: 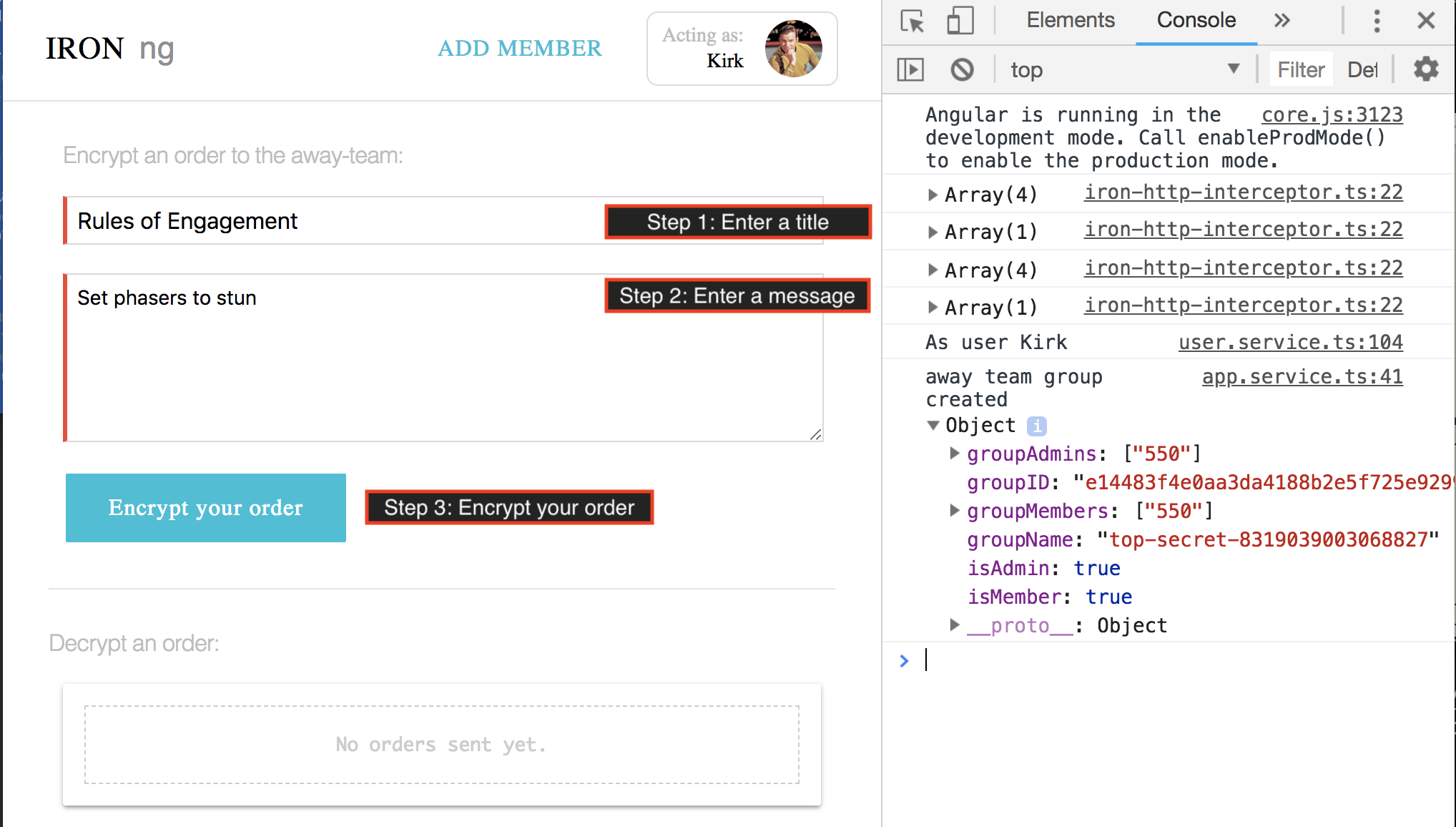 Encrypt an order with these three steps:

If you look in your developer console, you will see a log message similar to:

The interceptor configuration code is in app.module.ts.

When you encrypt an order, the Angular application instantiates an Order class with a title and message property and sends it to a REST API backend.

Encryption policy is specified declaratively with the IronEncrypt decorator. Here is an example of the decorator attaching the policy encyrpt to the away team to class Order (defined in order.ts).

class Order is defined in order.ts.

The away-team is an example of a group. Groups allow Kirk to encrypt to the away-team, but decide later who is part of the team. This access control is cryptographically enforced.

Continuing to examine the console log, you will see a message similar to below:

The IronHttpInterceptor transparently encrypted the HTTP payload. Kirk's command can only be decrypted by crew members that are members of the away team group.

The article Policy Based Client Side Encryption in Angular provides additional background on concepts and architecture.

Login as Mr. Spock with the following steps:

Mr. Spock is not authorized to see the message:

Add Mr. Spock to the Away Team

Switch logins back to Captain Kirk with the following steps:

Now add Mr. Spock to the away-team group with the following steps:

Now switch back to a login as Mr. Spock. You will see that this time, Spock is able to see the decrypted order:

Without touching the underlying data (order), Mr. Spock is granted access to the encrypted command. Behind the scenes, IronCore is using transform encryption. Transform encryption allows ciphertext encrypted to a group (e.g., the away team) to be transformed into ciphertext encrypted to a group member (e.g., Mr. Spock). The group member then locally decrypts data using their private key.

In our Angular application, the IronHttpInterceptor handles decryption transparently. Look in the console log to see a message similar to below:

IronHttpInterceptor automatically decrypts the payload. Using the IronCore SDK it's common to stand up a comprehensive data privacy architecture in less than a sprint.

Now to continue our voyage.

Unfortunately, Ensign Redshirt did not return from the latest away team mission. Captain Kirk has to, ahem, offboard him. Remove Redshirt from the away team with the following steps:

You will see that Ensign Redshirt is unable to decrypt the command.

Again, without touching the underlying data, you are able to revoke access to it. If you have heard about the GDPR privacy right to forget, this is an effective way to implement it.

That completes your first mission. By registering an HttpInterceptor and decorating class Order with a declarative policy, you've built an application that has better privacy and security than the most popular web application on Earth.

Now it's time to explore integrating IronCore into your application. To do so, sign up for your account at https://admin.ironcorelabs.com/.